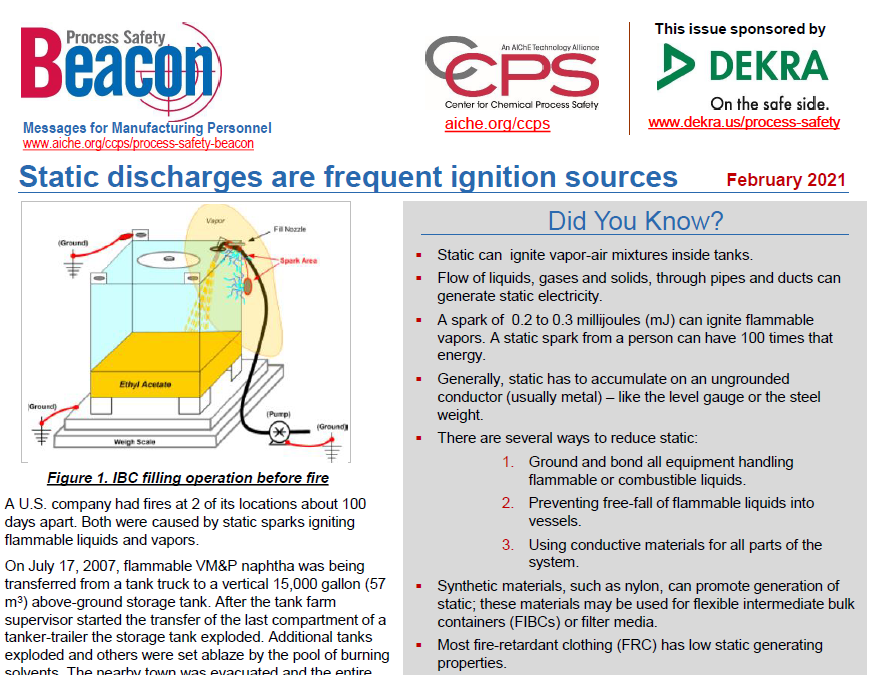 A U.S. company had fires at 2 of its locations about 100 days apart. Both were caused by static sparks igniting flammable liquids and vapors.

On July 17, 2007, flammable VM&P naphtha was being transferred from a tank truck to a vertical 15,000 gallon (57 m3 ) above ground storage tank. After the tank farm supervisor started the transfer of the last compartment of a tanker trailer the storage tank exploded. Additional tanks exploded and others were set ablaze by the pool of burning solvents. The nearby town was evacuated and the entire tank farm was destroyed. An employee and a firefighter were injured.

While the tanker and storage tank were grounded and the tank was bottom filled, the float style level gauge was not continuously grounded due to the rocking caused by turbulence in the tank. (Source: CSB Report No. 2007-06-I-KS and video)

On October 29,2007, an operator placed a short nozzle on the fill hose into a fill opening on top of the metal intermediate bulk container (IBC) and suspended a steel weight on the nozzle to keep it in place. The valve was opened to fill the IBC, then the operator walked across the room. A short time later, he heard a “popping” sound and saw the IBC engulfed in flames and the fill nozzle laying on the floor discharging ethyl acetate. The IBC was grounded, but flow through the non conductive hose generated static, and top filling caused excess vapors that was ignited outside the IBC by a static discharge between the IBC and the steel weight. (Source: CSB Report No. 2008-02-I-IA)