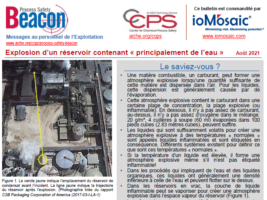 An incident in DeRidder, Louisiana, on February 8, 2017, was investigated and reported by the US Chemical Safety Board (CSB). The explosion occurred in a condensate tank (mostly water but containing some organic material) which led to an unanticipated flammable atmosphere.

According to the CSB report, the condensate tank failed at its base and traveled approximately 375 feet, over a six story building before landing on process equipment. There were three fatalities from the explosion, and seven people were injured.

The source of ignition was probably Hot Work that was performed near the tank. The organic material in the tank was turpentine, a solvent obtained from resin, contained in wood, during paper manufacturing. It consists of several hydrocarbons and is different from mineral turpentine, also called white spirit.

A small quantity of flammable liquid is no small hazard!