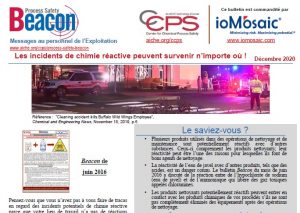 On November 7, 2019, in Burlington, Massachusetts, USA, a restaurant employee accidently spilled a  cleaner called “Scale Kleen” on the floor. Later, another employee began to clean the floor using a  different cleaner, called “Super 8.” These materials react to release toxic chlorine gas. The restaurant was  evacuated. Unfortunately, the restaurant manager was overcome by the fumes and died in the  hospital. According to the material safety data sheets, Super 8 contains nearly 10% sodium hypochlorite  (bleach), more concentrated than the usual household bleach. Scale Kleen contains both nitric and  phosphoric acids, at a total concentration of nearly 40%.

A few days later (Nov. 19), at a restaurant in nearby Woburn Massachusetts, two cleaning solutions were mixed, and toxic fumes were released. The restaurant was evacuated, and three people were  hospitalized as a precaution.

Never mix materials unless you know it is safe!