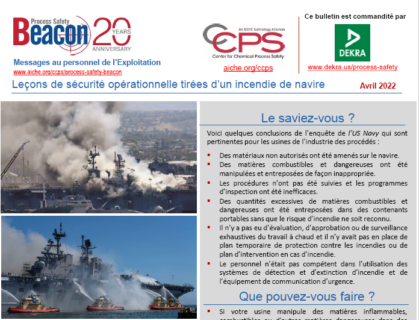 On July 12, 2020, a fire broke out on the US Navy ship USS Bonhomme Richard while it was docked in San Diego, California. The fire burned for 5 days and spread to 11 of the 15 decks of the ship. Temperatures from the fire exceeded 1400 F (760 C). The financial loss was more than 3 billion dollars, and the ship was decommissioned..

Following the fire, the US Navy conducted a study of 15 fires which had occurred in ships over a 12 year period prior to the Bonhomme Richard fire. This study identified multiple recurring casual factors, both in how the fires started, and how they escalated. Several of the causal factors in the Navy ship fires are also potential causes for a fire, or for a fire to grow into a more severe incident, in the process industries.

Look for process safety lessons in the news!