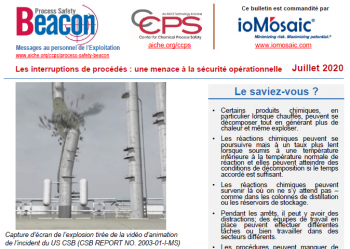 An explosion on October 13, 2002, propelled large fragments of debris offsite, some landed near crude oil storage tanks. Three people were injured, but fortunately, no fatalities occurred. Steam leaking through manual block valves heated crude Mononitrotoluene (MNT) inside a vacuum distillation column, which was shut down and thought to be isolated. The column contained about 1,200 gallons (4.5 m3) of MNT, an energetic and reactive material which can decompose violently when heated. The material decomposed over several days, resulting in a runaway reaction and explosion. Debris from the explosion caused a storage tank fire and numerous smaller fires both onsite and offsite.

Low product demand delayed start up, but the MNT column was kept in total reflux, until the plant-wide shutdown was completed. A fire elsewhere caused operators to isolate heat sources to all columns including the MNT column by closing manual steam block valves and control valves. However, the valves on the MNT column were leaking through, and the temperature of the material in the MNT column did not drop but continued to rise, exceeding 450°F (232 °C) in about 8 days. There was no alarm, and there is no evidence that Operations personnel actively monitored the column temperature control system.

Pay attention to all equipment containing chemicals, even if it is “shut down“.