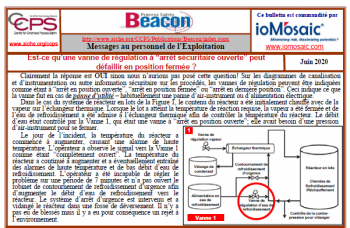 Can a “fail open” valve fail closed?. Clearly the answer is YES or we would not have asked the question! On piping and instrumentation diagrams (P&IDs) or other process safety information (PSI), valves may be indicated as “fail open,” “fail closed,” or “fail in last position.” This indicates what the valve does in case of utility failure – usually instrument air or electric power failure.

In the batch reactor system in Figure 1, the reactor contents were initially heated with steam on the heat exchanger. When the batch reached the required reaction temperature, steam was shut off and chilled water was turned on to the heat exchanger to control the reactor temperature. The water flow was controlled by Valve 1, which was a “fail open” valve; it required instrument air pressure to close the valve.

What if that “fail open” valve fails closed?