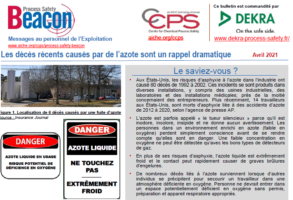 A recent event in Gainesville, Georgia, US, involved a significant leak of liquid nitrogen. A poultry processing plant used liquid nitrogen to quickly freeze chicken products. This freezing system had only been in operation for 4 6 weeks before the event. Six workers died and 12 others were taken to a hospital. 130 people had to be evacuated. A maintenance manager shut off an external isolation valve, stopping the flow of liquid nitrogen to the process and likely preventing further exposures. While the causes are still under investigation, it serves as a reminder for us to understand the hazards of nitrogen and use extreme caution when working in or around nitrogen consuming operations.

Many other oxygen deficiency incidents have occurred due to nitrogen leaks or purging. Entering a confined space with an oxygen deficient atmosphere without testing or a proper breathing apparatus is one of the most frequent causes of asphyxiations.

Nitrogen is often a safeguard, but it also has serious hazards.