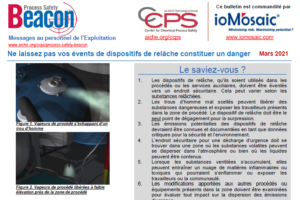 On April 12, 2004, a company in Dalton Georgia, USA was contracted to make triallyl cyanurate. A runaway reaction occurred, and flammable and toxic allyl alcohol and allyl chloride were released to the atmosphere. Some material was released through a poorly sealed manway (Figure 1) and more through the rupture disc vent which discharged near the base of the reactor (Figure 2). The release forced the evacuation of over 200 families in the surrounding community.

One worker received chemical burns and 154 people including 15 emergency responders had to be decontaminated and treated for chemical exposure. (Sources: CSB report 2004 09 I GA. Figures from the CSB video “Reactive Hazards”)

Another company in the U.S. received a regulatory inspection. They were cited for not venting process relief valves to a safe location. While the vents discharged outdoors, the release point was directly over an exit from the process building. An employee exiting during a relief discharge could have walked right into a cloud of process materials.

Relief devices need to vent to a safe location. Verify that the locations are actually safe