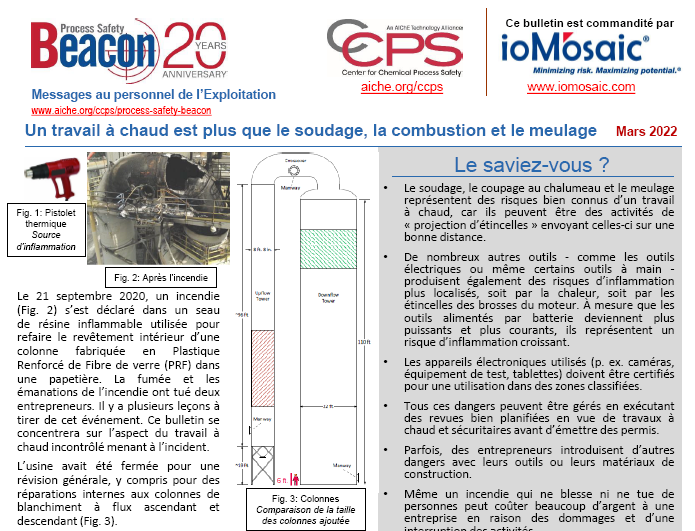 On September 21, 2020, a fire (Fig. 2) was ignited in a bucket of flammable resin being used to reline a Fiberglass Reinforced Plastic (FRP) tower at a papermill. Smoke and fumes from the fire killed two contractors. There are many lessons to be learned from this event. This Beacon will focus on the uncontrolled Hot Work aspect of the incident.

The plant was shut down for a turnaround, including internal repairs to the Upflow and Downflow bleaching columns (Fig. 3).

The repairs to these were managed under two Confined Space Entry (CSE) Permits. Hot Work was not planned, nor authorized for either job. There were no flammable materials in the towers, though the FRP walls in the Upflow Tower were combustible.

On the day of the fire, the crew working in the Upflow Tower left ) were having difficulty getting their resin to cure properly, due to cool temperatures. When they found no drum heaters for the drum outside the tower, they decided to use a heat gun (Fig. 1) for the bucket at their working place ( marked red ).

The heat gun was accidentally dropped into a resin bucket, igniting the flammable contents. The crew didn’t have a fire extinguisher, and the fire spread eventually igniting the FRP walls. Two contractors working in the connected Downflow Tower ( right; marked green ) were overcome by the gases before they could escape.

Even if not spark scattering, the use of electrical tools is Hot Work!