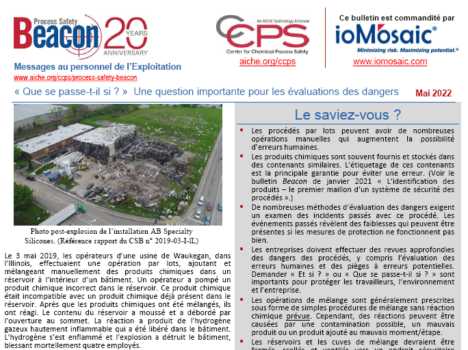 On May 3, 2019, operators at a plant in Waukegan, Illinois were performing a batch operation, manually adding and mixing chemicals in a tank inside a building. An operator pumped an incorrect chemical into the tank. That chemical was incompatible with a chemical already in the tank. After the chemicals were mixed; they reacted. The tank contents foamed and overflowed from the tank top opening. The reaction produced highly flammable hydrogen gas which was released into the building. The hydrogen ignited, and the explosion destroyed the building, fatally injuring four employees.

The incompatible chemical was stored in a 55 gallon blue plastic drum identical to drums containing the correct chemicals. The only differentiating markings were small labels on the drums and bung caps. The company did not have a written procedure requiring employees to segregate incompatible chemicals in the production building or to remove containers after use. In March 2019, two months before this incident, this company had a near miss involving two chemicals stored in similar 55 gallon blue metal drums. The wrong material was added to a batch from similar drums. To avoid confusion from similar containers, it developed a procedure for 2 people to verify material identity prior to addition.

This company assessed product manufacturing operations using a “Technical Service Request” (TSR), which evaluated business and safety risks. The TSR did not, and was not intended to, assess hazards of process operations or to establish safeguards.

During the incident, workers recognized that a process upset had occurred when the tank overflowed, and a fog formed. However, the workers did not recognize the immediate hydrogen hazard created by the upset which was noted on the Safety Data Sheet (SDS) for the input

Sometimes, we need to think the “unthinkable.”