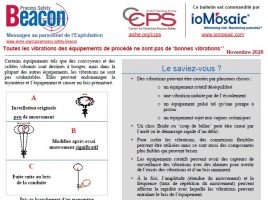 Some equipment such as vibratory conveyors and screens are meant to move, but in most other equipment, vibration is not desirable. It can lead to piping and equipment damage including premature failure.

A new compressor system was starting operation (Diagram A) The pressure gauge connection was modified during a temporary troubleshooting procedure. (Diagram B). A longer pipe was left in place and the pressure gauge reattached to it. Vibration from the compressor and the longer pipe increased the amount of movement. The connection failed and caused a large release of flammable vapor which, fortunately, did not ignite, but caused a significant environmental release.(Diagram C )

In another incident, during a routine walk-around, an operator pointed out a pipe that was moving about 1” (2.5cm). He explained that this was seen when the rotor on a wiped film evaporator was out of balance. The imbalance forced a 50% reduction in production to meet quality limits. After repairing the main bearings and the evaporator rotor, the movement disappeared, and the production rate returned to the normal level.

Vibration is the process telling you something is wrong. Listen to it!